Let’s get something straight right off. Tim Hill is not, and most likely never will be, a star. By any stretch of the imagination. And he’s 100% okay with that.

Who is Tim Hill?

Tim Hill is an actor you almost certainly have never heard of - but there's a decent chance you may have seen or heard his work without realizing it.

He’s only rarely been cast in really big lead roles, and only on local stages (Martin Luther in Luther, The Monster in Frankenstein, et al). Even then the productions were likely to be under-the-radar, sparsely attended affairs (despite a fair amount of critical acclaim). There aren’t enough “Off”s to set before “Broadway” to describe some of the fringe work Tim has done.

Yet somehow given enough time he’s managed to get himself hired to work on some very high profile projects, and with some extremely accomplished fellow performers. By present count he’s worked with three Academy Award® winners, three veterans of Saturday Night Live, a bunch of past Oregon Shakespeare Company veterans and one Kentucky Derby winner (the horse, not the jockey).

What drove him to try this acting thing? 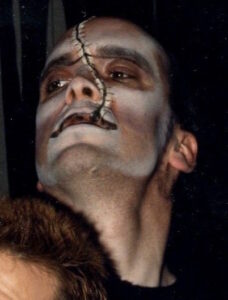 But why would a kid from an Oregon town so small it literally had only one traffic light decide to chase his dream of becoming a professional actor? Was he “stage struck?” Well, that’s certainly what started it. Was he naïve about how competitive acting is? Absolutely. Did he fall victim to his own hubris? Oh, yeah, he’ll freely cop to a healthy dose of that, for sure.

Why has he stuck with such an unpredictable and often frustrating pursuit? That one's easy: stubbornness...and love of the craft...but mostly stubbornness. That’s undoubtedly a major factor driving Tim to stick to it for almost 40 years. The more people told him he was foolish, the more determined he became to prove them wrong.

And thanks to the incredible, unwavering support from his wife Teresa, some good breaks, top notch representation from agencies like Big Fish NW Talent, and a personal determination to grow in the craft, he’s made some headway.

And perhaps best of all - he’s done it without leaving the Pacific Northwest. When it comes to artistic opportunities, it’s always been quality of life over quantity of random opportunities that Tim has valued most.

He’s managed to navigate the ebbs and flows of the regional theatre, film and video scenes to arrive at a place where he’s known for doing consistently good work, conducting himself in a professional manner, and bringing a positive vibe with him to every job.

His live theatre days are mostly behind him, but when a new TV or film project arrives in the Pacific Northwest, Tim is as likely as anyone to be a “first audition call” for day player parts in his demographic. He won Lana Veenker Casting awards all four years they were given. To non-actors that may not seem like much, but for regional character actors, that’s where you want to be.

Frequently those auditions have led to bookings. When Electric Entertainment moved production of its popular crime caper series Leverage to Portland in 2008, Tim was one of the first local day players booked. He’s followed that with co-star roles on NBC’s Grimm, IFC’s Portlandia and Documentary Now! (scene sadly deleted), Discovery ID’s Wonderland Murders, and most recently a featured role on Hulu’s third and final season of Shrill.

It’s important to note that none of these film and video opportunities would been available in Oregon without the tireless efforts of the Oregon Film Office and the production tax credits it has helped shepherd through the state legislature.

Whatever the enticement, once film and TV productions set up shop in Oregon they don’t regret it. The variety of locations, from the vast high deserts east of the Cascade Mountains, to the lush green of the Willamette Valley, to the beautiful and rugged Pacific Coast, offers a visual palette that any director or designer would be thrilled and inspired to work with.

Crews are world class, some folks having gained experience locally on the many commercial and industrial projects shot in the PNW. Others have brought their experience and skills with them from Hollywood, NYC and elsewhere, migrating here for the same quality of life reasons others (like Tim Hill) never leave. From pre-production and casting, to shooting to post-production, graphics, animation, audio…you name it, talent and resources abound in the Pacific Northwest.

So there you have it – a brief introduction to a working regional professional actor. That’s not to say the he wouldn’t hop on a plane for the right opportunity. It’s a global media universe after all. But when production wraps, Tim Hill knows that he’ll be returning home to his beloved Northwest.